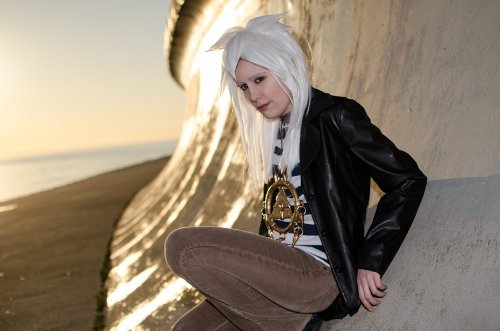 Margot La Rue has sent us in another Show Us Your Moves Submission! She covers her awesome Bakura cosplay, a character from the Yu Gi Oh series! To get the spiky hair that Bakura has she utilized our 37″ Spiky Long Cosplay Wig in Classic White and styled it to achieve the look she needed. Check out pictures and her story below! 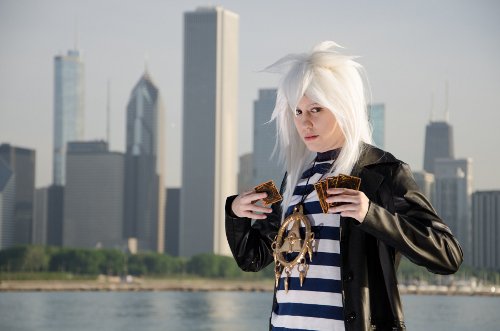 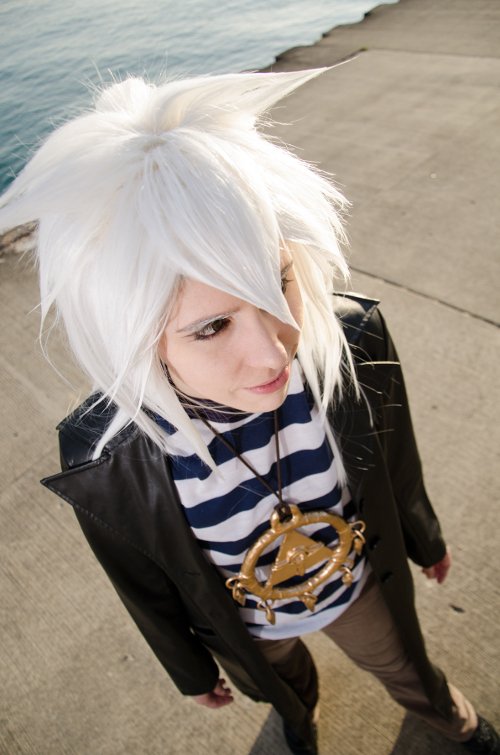 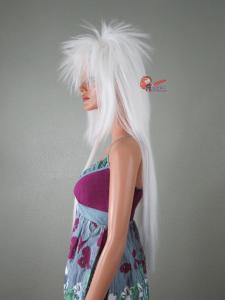 I am Margot la Rue, 23 years old and a Fashion Design student at Columbia College Chicago.

The Photos are by Heekun,(you can find him at Secretasianman.tv) with full permission for me to use them here.

The cosplay I am submitting is Ryo Bakura from Season 5 of Yu-Gi-Oh. I used the 37″ White Spiky Long Cosplay Wig. All I did was cut the back to the right length and spike the top.

My cosplay debut was in February of 2010: My friend Ellie was extremely fond of cosplay and talked about it often. I was immediately curious. Though a bit intimidated by the people I had seen cosplaying online, I started with a simple costume. I had some experience sewing, but there were gaps in my knowledge. I also did not have access to a sewing machine. Since I did not get the chance to use a sewing machine
for a while, I would make my costumes by hand. When I moved from Texas to Chicago for school, I started taking the Costume Construction classes offered in the theater department of my College. They have
improved my sewing ability and given me confidence to take on bigger projects.

I chose Bakura because I used to cosplay Yu-Gi-Oh all the time but had fallen out of love with the show. I had everything, except the wig, to cosplay Bakura for a while, but I never did it. When I saw this wig on Epic Cosplay.com I decided to get it so I could finally cosplay Bakura and then use the wig for a cosplay I have planed latter.

My favorit thing about Epic’s Wigs is how soft they are.  As soon as I take them out of the package I run my fingers thru them for a while.

My next Cosplay will be Zatanna from the DC Ame-comi series. I already Have my Epic Cosplay wig for this cosplay ready to go.

FacebookTweetPinEmail
Posted by Epic Cosplay on Posted on January 1, 2013December 8, 2018
Share this ArticleLike this article? Email it to a friend!
Email sent!