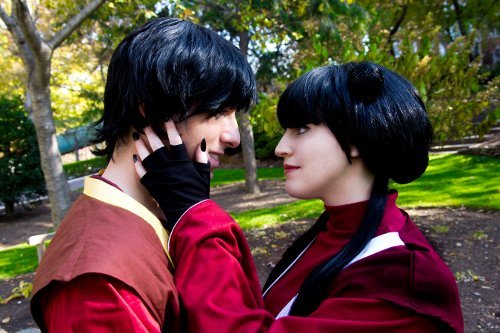 Here’s one of entries for our Valentine’s Day Couples Contest!  Scoty2hoty and SeibaTooth are cosplaying as Zuko and Mai from Avatar the Last Airbender. They used our Theia 20″ black straight long cosplay wig! Look on to see some more about their cosplays!

-What inspired you to do these cosplays?

Our mutual friends were planning an Avatar group and Seiba came to hang out with them. She had a crush on Scotty, but was kinda shy. They asked if she wanted to join the Avatar group and she said sure because she was asked to cosplay Mai anyway over a year ago, but it never happened. Scotty jokingly put his arm around her and said “Well, I guess we’re dating then.” She had no idea he was their Zuko! A few months later, before we were to wear these cosplays, he asked her out and now we’ve been going strong for half a year. This was our first of soon to be many couple cosplays! 🙂

-What got you into cosplay?

Seiba has been going to conventions with her father since 1991 when she was just a baby! Around the age of 11 she really started to take notice of cosplayers and asked her father if she could try to do that. He encouraged her and she’s been into it ever since!
Scotty started going to cons only a few years ago and had cosplayed once or twice before this with friends, but this is his first full out cosplay. Having a girlfriend who has been into the hobby for years kinda helps. 😉

-Why do you love cosplay?

We both really do like being artsy and acting silly. It’s a great -opportunity to have fun with friends as well as with each other. Seiba loves creating the outfit and putting it all together, while Scotty is much more a ham in front of the camera. It’s a good mix!

FacebookTweetPinEmail
Posted by Epic Cosplay on Posted on February 9, 2013December 8, 2018
Share this ArticleLike this article? Email it to a friend!
Email sent!