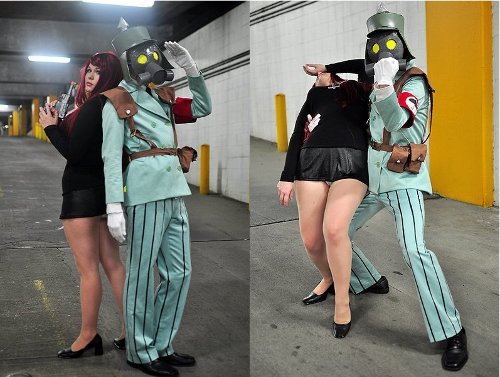 Here’s one of entries for our Valentine’s Day Couples Contest! Meghan and Brian are cosplaying as Parasoul and Black Egret from Skullgirls.  While neither of these cosplayers used our wigs we have a wig perfect for cosplaying as Parasoul (Black Egret doesn’t seem to need a wig right now!) For a Parasoul cosplay we recommend our Nyx Wig in Dark Red. Look on to see some more about their cosplays!

-What inspired you to do these cosplays?
We played Skullgirls together a lot when it came out! Which mostly ended with us yelling and complaining at each other (he used double and her hornet bomber was ANNOYING and I used zoned a lot which drove him insane!). I used a team of Parasoul and Peacock, and expressed interest in cosplaying Parasoul and he said that the Egrets uniforms were cool and it just sorta..went from there!

-Why do you love cosplay?
sewing is a really fun craft, and it’s really fun to make such elaborate (and often time ridiculous) outfits. The total transformation to a character is also super overwhelming and fun! Sewing and going to cons with my friends are seriously some of the most fun times I have!

FacebookTweetPinEmail
Posted by Epic Cosplay on Posted on February 20, 2013December 8, 2018
Share this ArticleLike this article? Email it to a friend!
Email sent!