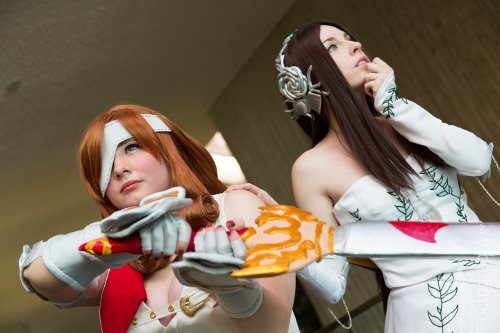 Here is one of the entries for our Valentine’s Day Couples Contest! Christine Hickey and Kerry Oak (Vicious Cosplay and Naiiki Cosplay) are cosplaying as Beatrix and Princess Garnet from the game Final Fantasy IX! Although neither cosplayer used a wig from EpicCosplay, we have some recommendations that would work well with some styling for each of these characters. For Beatrix, we recommend using our Nyx Wig in Cocoa Brown as a base wig and styling in her curls. If you need help with styling this wig check out this tutorial that DizzyLizzy’s created for us for tips on how you can style Beatrix’s curls into our wig! For Princess Garnet, we would recommend going with our Asteria Wig in Dark Brown. Read on to learn more about these cosplayers!

-What inspired you to do these cosplays?
Vicious: We’d been looking for something to cosplay together. Finally it hit me! I could be the Beatrix to her Garnet and protect my princess! It was also the first character in a while that was also as endowed as me, so it made it double complicated.

Naiiki:  I’ve always wanted to make a big dress, and be a princess. When I played FFIX, I instantly bonded with Garnet and I knew I wanted to cosplay her… except I don’t like her orange jumpsuit all that much… Then it dawned on me: I should make her princess dress! The rest is history.

-What got you into cosplay?
Vicious: Sadly enough, an ex-girlfriend. She was an old rping buddy and we decided to cosplay the characters that we shipped. I was lucky for getting such great friends in the cosplay community that I didn’t drop going to conventions after a rather terrible breakup. Because if I had, I would have never met Naiiki. : )

Naiiki: I started going to cons in 2005, and that was the first time I saw cosplay in person. I knew I wanted to do it too! I didn’t start making my own costumes until late 2010, though.

-Why do you love cosplay?
Vicious: Sewing! The community! Getting your picture taken! Dressing up as your favorite characters! Sleep deprivation! Being broke! Having no time! Wait, what was the question?

Naiiki:  Cosplay is my creative outlet. What I cannot do with a pencil, and I can make with fabric. I love being able to dress up as a beloved character, and take photos with other cosplayers from the same series. It makes the series/game even more special now that I’ve made a connection!

Photograph is credited to Octography

FacebookTweetPinEmail
Posted by Epic Cosplay on Posted on February 24, 2013December 8, 2018
Share this ArticleLike this article? Email it to a friend!
Email sent!