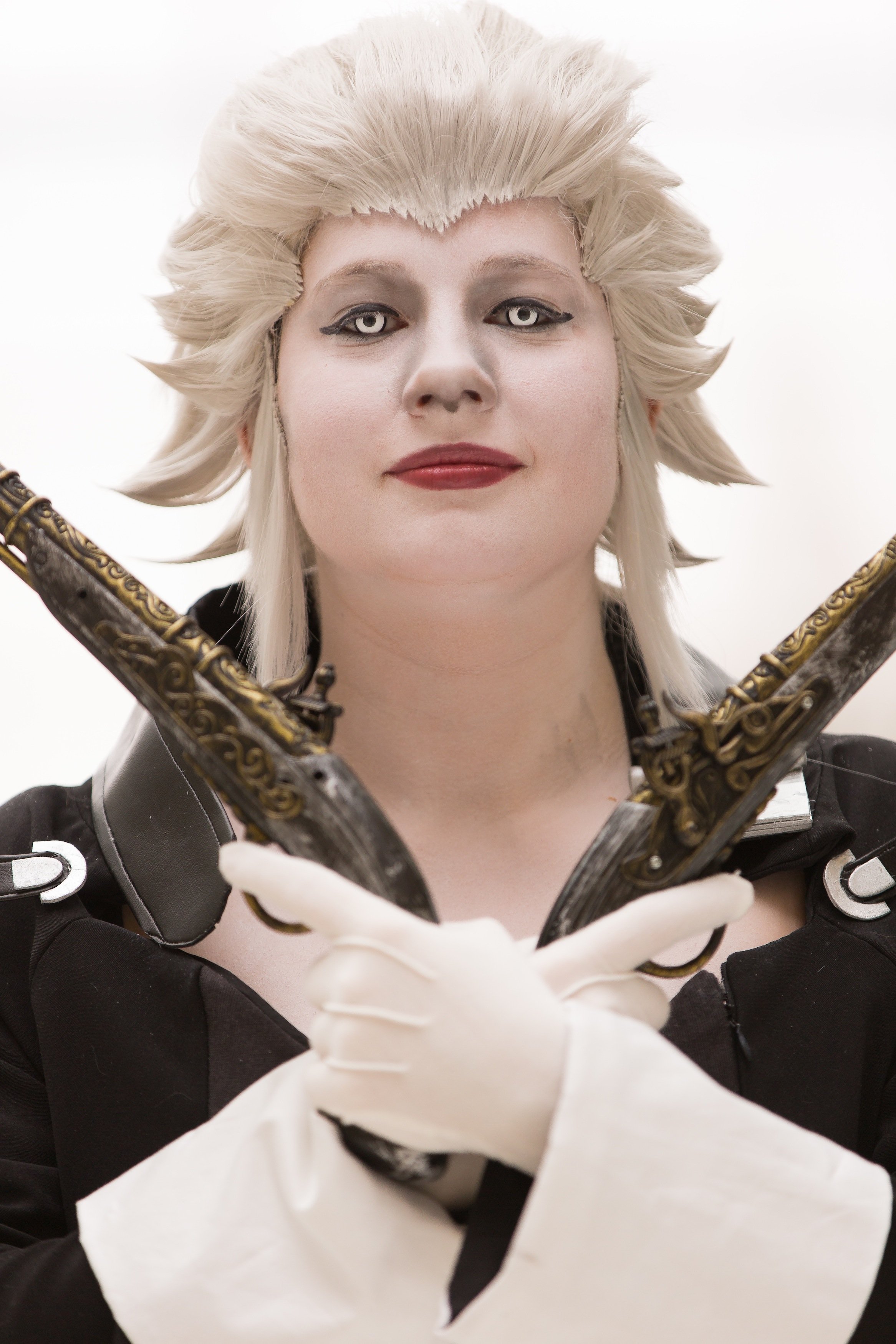 “The Story Behind this Wig and Why I Love Epic Cosplay:
Initially I had a completely different wig for this cosplay, a Dionysus 24″ in white. This wig was actually meant for another character that I had booted off my schedule for the year to do this one instead. Unfortunately, that wig does not like to have the bangs pulled back. I struggled maybe 6 hours attempting to do that, and then began to chop the fibers down to begin the spiking. I had chopped too far though and absolutely ruined the wig. So devistated by all of the push backs I had starting this costume and watching Katsucon appear on the horizon, and no Apollo in white or Silver Grey, I gave up completely. I posted on my wall my utter defeat and sunk in my sewing chair in tears.

A marketing staff member who follows my page rather fondly messaged me not 20 minutes later, looking to help me out. I explained my issues with the wig, showed her references of the character, and for the next hour or so we tagged back and forth in my PMs on solutions to it. She contacted the warehouse for me (or attempted to, as it was past closing time for them) plotted out the color difference, and really helped me brainstorm on a good alternative. She even contacted me the next morning as to getting the information that a rush shipment was coming in for the Apollo in both those colors, and that she’d inform me the moment she heard they got in (which she did). The wig came in days later with a lovely decorated sleeve by the packaging apartment, and I finished the wig with flying colors not a couple days later- and I must say I couldn’t have been happier.

Not only did I get the help I needed in an alternative wig, but I had a marketing member find me online in my moment of need and reached out to help me and pick me up again. Never had I had a wig company that had ever been so compassionate with their customers and jump hand over foot in order to make sure a solution could be found. This locked me in forever with Epic!

The ACTUAL Wig Styling!
The silver grey color was a much better choice against the contrast of Merlwyb’s pure white skin, so I was very happy with the addition. Knowing the overall volume of the Apollo and Merlwyb’s additions I needed extra wefts. I decided to opt for the cheaper curly ponytail over the actual weft extensions because all of them were going to be chopped to bits anyway, and I had no need for the actual sewing wefts. My flat iron and some scissors separated them well from the clip, and the extra clip is now useful for me working on wigs!

After pinning the wig to my wig head, I used a sharpie on extra painters tape to mark out the exact area I wanted the widows peak and sideburns to fall. The base of both were pieces of medium-weight non-fusible interfacing that were tacky glued to the inside of the wig. While those dried I used bobby pins and clips to separate the areas I wanted to spike out, and used some got2b glued spray and a hair dryer to pull back the original wefts. The Apollo doesn’t really like to be pulled back that way either, but some force and patience made the wefts go as flat as I could force them too.

I flipped between spiking the sections with my fingers and adding wefts to tacky glue over the cut otu widows peak, leaving ample room at the bottom for cutting away later. Some of the spikes needed to be cut shorter, so in the process of spraying them I used a pair of thinning sheers to thin out the hairs and make the spike thinner in some places. Essentially spiking was a process of holding the hair, hitting it with hair spray, and then a light dry cycle with my hair dryer. When all was dry I used tacky glue at the tips to make it super hard.

Once the wefts were dry for the hairline, I used the dryer and spray to blend those wefts in with the main spikes. Then I used heavier scissors to cut through the glue and wefts to shorten the size. To give it a more ‘natural’ look, I added extra v slices to make the hair appear as if it was coming more out of my head. The side burns had to be cut down, which I did more efficiently after putting the wig on my head.

This wig is also somewhat fragile due to the thickness of the spikes, and living in a house of cats I don’t trust even on a wig head it would be safe. I actually made a wig box out of cardboard, hot glue, and excess fabric in order to help her travel to conventions and store much more easily (tutorial here: https://viciouscosplay.com/tutorials/wigbox.shtml)

Normally I hate spiking wigs, but I am extremely proud at how this came out!”

FacebookTweetPinEmail
Posted by Epic Cosplay on Posted on April 19, 2015January 17, 2020
Share this ArticleLike this article? Email it to a friend!
Email sent!