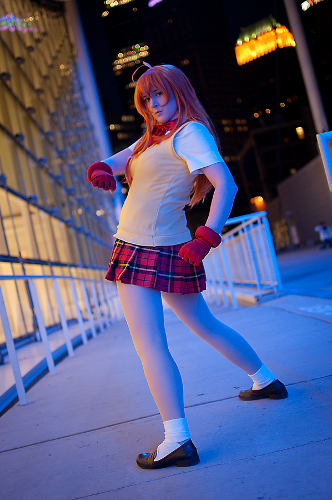 In this blog post, Jessica chose to feature her Hakufu Sonsaku cosplay from Ikkitousen! She used our Nyx Wig in Autumn Orange to complete her look! Check out her entry below!

I’ve always like sewing to an extent, my grandmother was a seamstress and taught me to sew when I was young. I got into cosplay its self though when I got into college and started going to anime conventions.

Around late 2005, though I didn’t really make a costume I’m proud of attaching myself too until the next year. My first couple costumes were uh, a smidge awful. That was the norm back in the day though, bad costume and lots of fun.

It wasn’t actually out of any great love for the character (though I do like the series;) I was actually asked to do a skit for Katsucon this year about a week before the con, and I needed a character that was a glutton – and Hakufu fit the bill. It was fun to make though, and we ended up winning best master skit :3

Besides making it in under a week? I would say getting the vest right – it required using two different textures of ribknit, dying it (because the fabric just doesn’t come with that color,) lining, and a good deal of fitting to get it right. But really, in general it was a simple fun costume for me.

The wig was a touch difficult too; there is a ton of hairspray to get the bangs/ahoge to sit properly! I didn’t have to trim the length at all, thank goodness, but I did have to trimming & styling of the bangs on it.

My next planned costume is Hermes from Jojo’s Bizarre Adventure though… I have a fairly large list. Who doesn’t?

The crafting aspect allows me to indulge my severe streak of perfectionism. Sure, I love wearing it, and I LOVE taking pictures, but actually making the costumes is almost therapeutic for me. There’s something extremely rewarding in creating a costume, yourself, and sitting back on going ‘This is AWESOME and I did a fantastic job’

I adore how thick they are, and I absolutely adore how resistant they are to tangling. I’ve found, compared to other wig sellers, you’re just don’t tend to mat NEARLY as badly, and that is an absolute blessing when it comes to wearing longer wigs, especially when its windy outside.

FacebookTweetPinEmail
Posted by Epic Cosplay on Posted on July 24, 2013December 8, 2018
Share this ArticleLike this article? Email it to a friend!
Email sent!