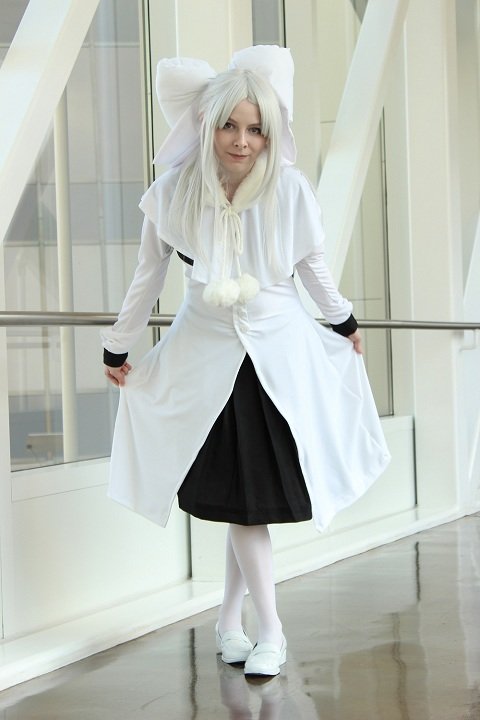 Here we have another submission, this time it’s Alyssa as White Len from Melty Blood!  She used our Dione wig in Classic White to really bring her design together!

Ever since I was a little girl, I’ve always been trying to dress up like the characters on TV.  I remember running around as a little girl in a skirt and white shirt with a hairbow attached, convinced I could be a sailor scout from Sailor Moon.  It’s served as an escape when things were tough.  Who doesn’t want to dress up as some sort of superhero or cartoon character when nothing seems to be going right?

I really got serious about cosplaying about six years ago.  I didn’t publicly debut a costume until Anime Weekend Atlanta 2009 though.

She’s a succubus full of icy goodness!  I think she’s really cute.  Someone wanted me to cosplay her but I never cosplay characters I don’t actually feel some sort of emotional character to.  I really wanted to surprise this person, so I went and played the game and was instantly attached.  It’s good that they had such a great taste in characters!

The dress part.  I had a two week deadline to make the costume.  The first dress I made for her just didn’t feel right, so I scrapped it completely and made an entirely new dress altogether.  I don’t work with patterns, so I had to eyeball it all, but in the end I love how it came out.

I’m really looking forward to cosplaying my Guild Wars 2 character.  I’ve already ordered the wig for it, and of course it’s from you guys!  (Hestia in Silvery White)

Meeting up with my friends and taking pictures together.  It’s a lot of fun when you have someone to cosplay with.  When a convention rolls around, my friends and I try to plan our costumes around each other so we can hang out as a group all day.  When we pose for pictures, the ideas are endless between us!

It’s really really soft.  I wish my real hair was this soft!!!  The color of it just barely off white, which makes it seem a lot more realistic, especially in photographs and you can easily style it.  I also love the way the ends just barely curl, it’s really cute!

FacebookTweetPinEmail
Posted by Epic Cosplay on Posted on December 24, 2012December 8, 2018
Share this ArticleLike this article? Email it to a friend!
Email sent!