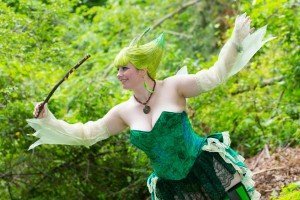 We’ve got one more cosplay submission from the lovely Vicious Cosplay! In this feature she showed us her Celebi Gijinka cosplay, a super cute adorable original design she did! Check out her story below!

She utilized our Nyx Model wig in Tea Green to obtain the look she was aiming for. You can check it out at the picture below! 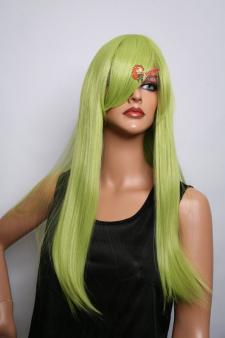 The story with the hilarity of this wig started at the Anime Central Epic Cosplay booth. This was the only wig that I could find in anywhere NEAR the color I wanted without having to daringly take the frightening road of going to Ebay. Not only did I costume change on the seller between talking to him about the wig and getting my credit card, I had a fun conversation outside of the booth with Cosplay America himself wearing one of the Epic Cosplay wigs! There was later a slight panic attack that my wig had gotten lost in the mail which resulted in a worried email the day before it arrived.

Making the wig was an interesting task indeed, since I’ve never really made anything that ‘defied gravity.’ It was a blessing in disguise though that I had decided to make this wig not a few weeks after Anime Central, when Malinda-chan debuted her Kaito which also meant a lovely and informative tutorial from her (https://malindachan.deviantart.com/art/Kaito-Tenjo-Wig-297750716). It helped solve the almost 4 hour debate I had with the long wig while I had the wig head duck taped to my kitchen table.  The only unfortunate issue I had when I started weft ripping was remembering that this was not a netted wig, and therefore the wefts held the elastic together horizontally. At first I thought to myself ‘oh just leave it there it wont be a bother’ but then a reminder of those moving about underneath the weight of the tip would be obnoxious. So instead I used leftover yellow ribbon to make not-weft connections and hand stitched them to the elastic.

By the time I cut out the wefts and razored the hair shorter I had several feet of wefts that I could use to wrap around the edges of the wig and two fistfuls of excess fibers to add to all the extra areas not covered by the hair. A total of half a bottle of tacky glue, almost a full bottle of Got 2 Be Glued hold spray, and half a bottle of super Hold Got 2 Be Glued gel went into holding that wig up straight. Then even more of those holding items went into making the antenna that are attached to the wig via corkscrew design wires. Even with the added weight and the odd shape this is ironically one of my easiest styled wigs to pull on and the most comfortable to wear.