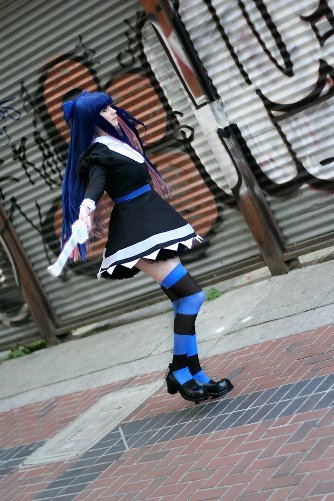 Hey, we have an entry for our Show Us Your Moves Contest!  Here we have Daydreamernessa as Stocking from the series Panty & Stocking with Garterbelt!  She used both our Athena in Blue Black Fusion and Persephone in Cotton Candy Pink (color discontinued) to help pull off Stocking’s hairstyle! Read on to see more about herself and her cosplay habits!

Hello! I’m Vanessa, from Daydreamernessa’s cosplay 🙂 https://www.facebook.com/pages/Daydreamernessas-Cosplay/142058442513366 — Here is my submission, photo was taken by my boyfriend so i have full rights over the photo. Just as a small blurb you guys are by far my most favorite wig shop! So here goes my submission-

– Wigs used?
40″ Athena in Midnight blue
40″ Persephone in Cotton Candy pink
–Technique used: The cotton candy pink wig’s wefts were cut, and then hand sewn into the blue wig. Be warned though that it does get heavy adding this much hair to a wig, that is already thick from the beginning! Sewing in some extra toupee clips is not a bad idea if it becomes too heavy! Bangs were trimmed quite a bit to get a blunt bang.

About 14 yrs. ago now, back in middle school while doing my usual searches for anime related sites, I stumbled upon cosplay websites, specifically usagichan.com run by Lionel. I browsed all the galleries and that’s how I found out about conventions & cosplay, and in turn found out there was Fanime in Santa Clara. I was able to attend my first Fanime back in 2002, and for Fanime 2003 me and my mom put together a home-made/storebought Sanosuke from Rurouni Kenshn- and I haven’t looked back since!

When I watched the first episode of Panty & stocking, I was literally sucked in. The transformation sequence alone was drool-worthy, and I had decided I am going to do this! I loved Panty’s design initially, but Stocking was much more fitting for me, and I am glad I stuck with my gut.

This is my 2nd Stocking I did, and with this design I wanted to keep an exaggerated cartoon-type look even down to the type of shoes. I translated the white lace as a basic stripe on the bottom of the dress, and I stuck with a triangle shaped lace hem. Making those pieces were the hardest part, because they were long.

…MANY. Though one I’d like to finally make now that the craze has died down, is Chii from Chobits, and yes I have an Epic wig just for it, i’ve had it for 2-3 years just sitting waiting for me to make Chii!

Wearing it with my friends! As corny as that sounds, it’s true. Although trying on a finished costume for the first time, wig+make-up and all is very exciting!

Everything. But the main draw is the lack of tangling, and how manageable the wig is and at 40″ that is a dream for any long hair character, and in anime, manga, video games etc. that is a staple!!
FacebookTweetPinEmail
Posted by Epic Cosplay on Posted on April 1, 2013
Share this ArticleLike this article? Email it to a friend!
Email sent!